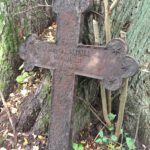 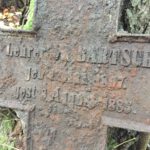 When Wilhelm Bartsch married the maid Wilhelmina born Waschke in the church of Rosengarten on 5 May 1827, the twenty-year-old was already a teacher at the village school opposite.[1] He taught all the children of Rosengarten there, because a second class was only established thirty years later, when the school, founded by the church in 1525 and taken over by the state in 1737, had a total of 166 pupils.[2] Probably his wife Wilhelmina died early and Bartsch married again afterwards – because in November 1864, a Martha Berta Bartsch was baptized in Rosengarten, the daughter of Wilhelm Bartsch, a teacher living in Rosengarten, and Heinriette Bartsch née Adamkowski.[3] When his daughter Rosalie married Fritz Wilhelm Wagner from Hamburg in Groß Steinort in November 1876, Bartsch, now 69, may have been retired, because he now lived in Olschöwen, 20 kilometres to the north.[4]