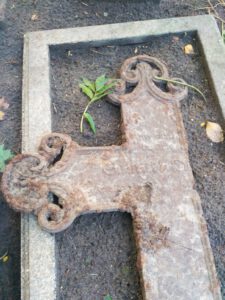 Samuel David was apparently an illegitimate child. His father was an instmann, i.e. a landless farm worker from Kamionek, named Christian Ihlo.[1] We don’t know who his mother was. It could have been Wilhelmine David, who was born in 1811, or Julianna Wilhelmine David, who was two years younger. Both were daughters of Christian David, a master blacksmith in Rosengarten.[2] Samuel himself worked as a castle gardener for the Lehndorffs, towards the end of his career in 1899 as head gardener.[3] So he organized the work in the park around Steinort Castle and ensured that from the windows of the castle to the front and back there was the perfect view of the Masurian Lake District.

On November 18, 1859, Samuel married Charlotte Gwiasda in the church of Rosengarten. Together they had two daughters. Therese Charlotte Maria was born on July 28, 1860. She may have been the reason for the wedding just over eight months earlier – or the premature result of the wedding night. Therese in 1879 married the then 25-year-old teacher Richard Franz Franz Puschke in 1879. His grave is also located in the cemetery of Groß Steinort. Their second daughter, Charlotte Auguste, was born on December 13, 1861. Charlotte also married a teacher there in 1882, Gustav Holzlöhner from Friedrichshof.[4]

After the turn of the century, Samuel David apparently retired, because at his death he was called a “former castle gardener”. August Borowski, buried in Groß Steinort, must have been one of his successors. The death register also records Samuel David’s death, which can no longer be read on the rust-encrusted grave cross – August 5, 1908.[5] His wife Charlotte survived him by two and a half years. She was buried next to him.