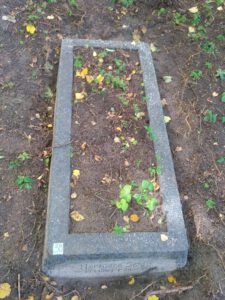 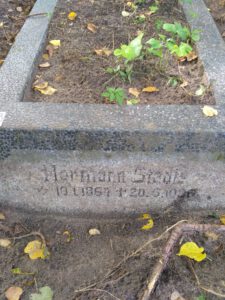 Hermann Stadie worked in Labab as a propertyless farm worker or instmann. He could look back on a family history typical of many people in the area. Hermann’s father Michael Stadie had also been an instmann, and his grandfather Gottlieb Eritt had served the Lehndorffs as a stud servant. Like their grandson and son, they had already lived in Labab.[1]

On 30 March 1891 Hermann Stadie married Auguste Schaack in Groß Steinort.[2] She too came from Labab. It is possible that Auguste had already gave birth to an illegitimate child two years before the wedding, but it was probably a stillbirth.[3] Hermann and Auguste had four daughters together. The oldest, Elise, was born in 1892. She married the worker Richard Skeip in 1923, but died two years after the birth of a child. Elise is buried next to her father in the cemetery of Groß Steinort. His second daughter Helena died in the year of her birth in 1894.[4] Helene Auguste was born in 1896. In 1920 she married Karl August Machmüller, a blacksmith from Dingen in Westphalia. Helene Auguste herself worked as a seamstress.[5] The last of the four sisters, Anna Maria, died two weeks after her birth in 1897.

Hermann Stadie did not have direct male descendants who carried on his name. Nevertheless, in 1945 there was still a couple Kurt and Erna Stadie with two children, probably extended relatives.[6]