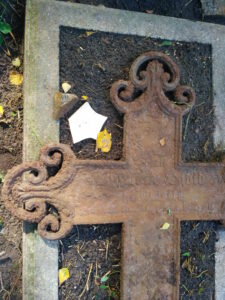 Charlotte Gwiasda grew up with at least eight siblings. Her father Ernst was a tailor. Her paternal grandfather Michael was a losmann, i.e. tenant of a small piece of land that was not sufficient to feed a family.[1] Charlotte’s ancestors had long lived in Groß Steinort. This also applied to her maternal grandfather, who was probably a valet at the castle.[2]

On November 18, 1859, Samuel married Charlotte Gwiasda in the church of Rosengarten. Together they had two daughters. Therese Charlotte Maria was born on July 28, 1860. She may have been the reason for the wedding just over eight months earlier – or the premature result of the wedding night. Therese married the 25-year-old teacher Richard Franz Puschke in 1879. His grave is also located in the cemetery of Groß Steinort. Their second daughter, Charlotte Auguste, was born on December 13, 1861. Charlotte also married a teacher there in 1882, Gustav Holzlöhner from Friedrichshof.[3]

After the turn of the century, Samuel David retired. He died in 1908 and was buried in Groß Steinort. His wife survived him by two and a half years. When she died in 1911, she was buried next to him. Gwiasdas have been in the area at least since the early 18th century[4] and continued to do so until at least 1945: That year a family of the name lived in Kittlitz.[5]