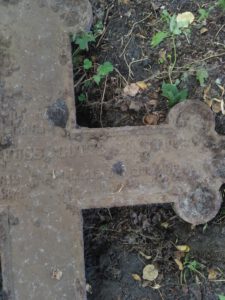 Barbara Matzik and Gottfried Sensfuss married on 22 May 1842 in the church of Rosengarten.[1] They had three children. The youngest daughter, born in 1845, was called Hermine and first married a Mr. Gedaschke, from whom she apparently divorced again, in order to marry for the second time in 1906, this time with Ludwig Podehl. The eldest child Pauline, born in 1843, married the master tailor Friedrich Niklas from the village of Kehlen (now Kal) a few kilometres away in 1868 and had five children with him.[2] The only son of Gottfried and Barbara Sensfuss, Julius August, who was born in 1844, like many other members of the family became potters. In 1893 he married Caroline Rochna, the daughter of a bricklayer from Stobben, in Groß Steinort. Julius August died in 1910 in Thiergarten (now Trygort) west of Angerburg.[3]

Gottfried Sensfuss was an innkeeper [4] on the island of Upalten, which belongs to Steinort, where all three children were born. The island was a very popular excursion destination, from which many postcards and pictures are preserved. Today it is part of a nature reserve. Already a few years before Gottfried’s death, Carl Wilhelm Sensfuss,[5] the father of Bertha Sensfuss who was also buried in the cemetery of Groß Steinort, and possibly a nephew of Gottfried, took over the inn on Upalten.