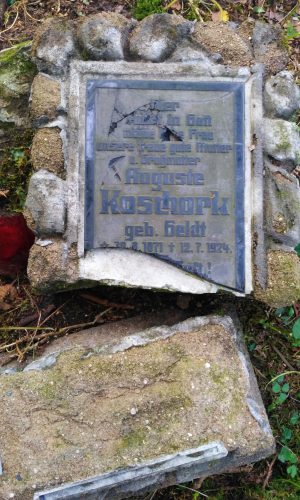 The origin of Auguste Heldt is unknown. Perhaps the teacher in Stawisken, Adolf Heldt, and his wife Heinriette were their parents. Or perhaps Barbara Heldt, who died in Rosengarten in 1903 at the age of 73, was her mother. With her husband, Carl Koschork, Koschorek or Koschorreck, who was employed at times as a postman, but mostly as a forestry worker, Auguste had at least two daughters named Bertha and Anna, who were born in Rosengarten in 1898 and 1900. A son named Carl Wilhelm Koschorreck was born in 1903.[1] Between 1905 and 1915, four more children were apparently born, but their names are unknown. The grandchild mentioned on the tombstone very probably was born by Auguste´s daughter Bertha. In 1922 Bertha married the chauffeur of the Lehndorffs, Friedrich Achenbach, with whom she had a son in 1923. At the time of her death, Auguste was living in Groß Steinort. Her husband Karl probably survived her if he is identical to the forestry worker Karl Koschorreck, who also died there in 1929 at the age of 60.[2] The couple Achenbach still lived in Groß Steinort until 1945 with their son, as well as a forestry worker Fritz Koschoreck with his wife Emma and a child.[3]