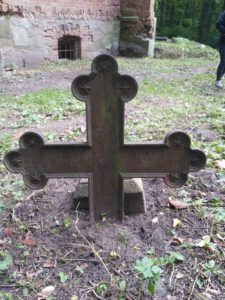 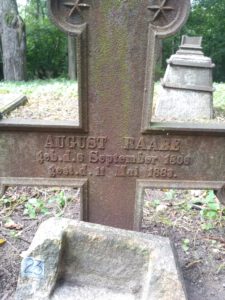 At a young age August Raabe already managed a property with fishing rights in Stobben, leased by the Lehndorffs. In 1840 he arranged for the construction of a barn and buildings for the storage of hay. Carl Friedrich Ludwig Graf von Lehndorff promised Raabe, at his request, to give “all material of wood, brick, stone, lime and half of the moss needed for covering” and to pay “also the craftsmen as bricklayers and carpenters”, “insofar as they carry out the work themselves, Mr. Raabe provides the henchmen for both craftsmen and also gives the other half of the required roof moss and all the necessary materials for this construction. As soon as the construction is completed, Mr. Raabe undertakes to take the cattle of all his instmen to the vorwerk for feeding“. Also ‘the accommodation of any cows of carpenters and other craftsmen or other people in his service remains his business”.[1]

As a landlord, Raabe was one of the few wealthy people in the region. In 1850 he voted in the Prussian state elections in the second electoral class – only Count Lehndorff voted in the first, the vast majority of the male population (women were not eligible to vote) in the third class. Raabe was also proposed as an elector of the parliamentary delegates (Wahlmann), but refused.[2]

August Raabe’s father was the pastor of the same name in Nikolaiken. Together with his wife Laura, a born Behrendt, August Raabe Jr. had eight children between 1835 and 1845. All were baptized in the church in Rosengarten. The youngest child, the daughter Martha Henriette, born in 1845, married Gustav Eduard Sperling, the pastor of Albrechtsdorf in the district of Preußisch Eylau, in 1864.[3]