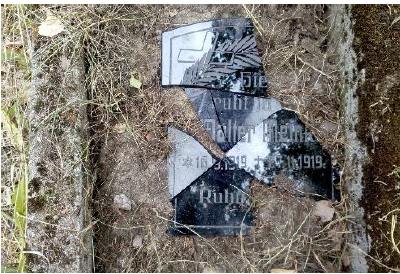 Grave #1 is clearly a child’s grave, it is only 45 cm x 85 cm. The border is made of concrete, at the head end there is a pedestal on which a plaque was placed. The grave is located relatively centrally in the cemetery, right next to two adult graves, between which there is another child’s grave. On the fragments of the glass plate the name of the child buried here can still be read well: Walter Meinke.

Ernst Meinke owned a dairy in Königstal.[1] Other family members in the village and the surrounding area were also involved in dairy farming. For example, in the village of Hinter Pogobien, not far away, there was a dairy tenant named Otto Meinke [2] and in Königstal there was a dairy assistant named Karl Meinke.[3] In March 1920, 27-year-old Alma Meinke, whose parents were dairy owners in the village, was buried there.[4] She is probably the daughter of Ernst Meinke and possibly the mother of Walter Meinke, who died only a few months earlier. In 1929, Ernst Meinke’s dairy was foreclosed. The butcher Otto Marquardt took over the property a little later, the Meinke family was allowed to stay in the former dairy building for about three months.[5] After that the family probably left the village, in any case they were no longer on record in Königstal.