The graves of Gottlieb and Charlotte Ulonska are located next to the former entrance on the left side of the cemetery. The grave borders are made of terrazzo. At the head end between the grave borders there is a stone on which the grave slab was originally placed. The slab is made of black glass, could be found broken at the grave and partly reassembled.

Charlotte was probably born in 1882 as the daughter of Friedrich Szesny. Her father was born out of wedlock. Although his mother Luise Szesny later married his father Jacob Pawelzik and Frederick unofficially took his father’s last name, when he entered military service he officially took his mother’s name again. When his mother died, his father bequeathed him the family’s three properties and had them registered in the name of Friedrich Pawelzik. Before his father died, however, Friedrich’s last name was not officially changed, so he carried the surname Szesny for the rest of his life.[1] He married Marie Posegga and had at least two children with her: Charlotte and Rudolf. In 1903, the parents sold two of their properties to Charlotte, who was not yet married at that time.[2] By the next year, she had married farmer Gottlieb Ulonska, and the two took over another property from Friedrich Szesny.[3] In 1911, Gottlieb and Charlotte Ulonska increased their property once again by purchasing a plot of land in Groß Pasken, which had belonged to Königstal since 1905.[4] Charlotte Ulonska died in 1911. 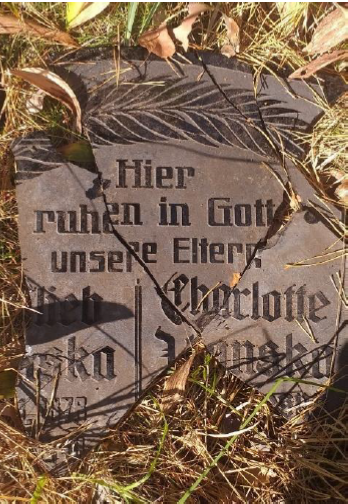 Charlotte Ulonska died on 01 January 1927 at the age of 45.[5] 13 years later – on 11 March 1940 – Gottlieb died of pneumonia.[6] There were several Ulonska families in Dziadowen/Königstal.[7] It is unclear who were the children who selected the grave plate of Gottlieb and Charlotte Ulonska.