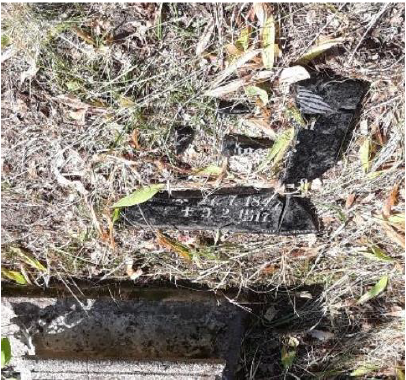 Grave no. 126 is most likely the grave of August Weberstädt. It is located a little bit aside in the middle of the cemetery, left of the former gate. The border is made of stained terrazzo and decorated with patterns like the pedestal for the grave plate. Only a few pieces of the black glass tablet could be found, only the month and year of birth as well as the date of death can be recognized. According to a comparison with the death register of Gehsen, the merchant August Weberstädt was buried here.[1]

August Weberstädt was married twice and had a total of nine children. With his first wife Marta, née Bednarski, he had three children: Otto, August and Eduard. Probably Marta died and August Weberstädt married a second time. His second wife was Alma, née Brähmer. They also had three children together: Erich, Erna and Emilie. Three more children died before they reached adulthood. August Weberstädt did not become a father until he was relatively old. When his oldest son Otto was born, he was already 48 years old. When his youngest daughter Emilie was born in September 1915, he had reached the proud age of 68. He died barely a year and a half later at the age of 69. The eldest son Otto was a merchant’s assistant and was serving as a soldier in World War I at the time, as was the second-born August. Eduard Weberstädt was only 15 years old when his father died and worked as a clerk at the district office. The other siblings were all still children.[2] After August Weberstädt’s death, his widow Alma remarried [3], his son August became a police sergeant in Wuppertal [4], Eduard became a sergeant and was stationed in Königsberg.[5] In the years following August Weberstädt’s death, the family was involved in several legal disputes. Alma had to sell the inherited properties due to debts. There were further disputes with the buyers, including over the inherited mortgages of the Weberstädt siblings.[6]